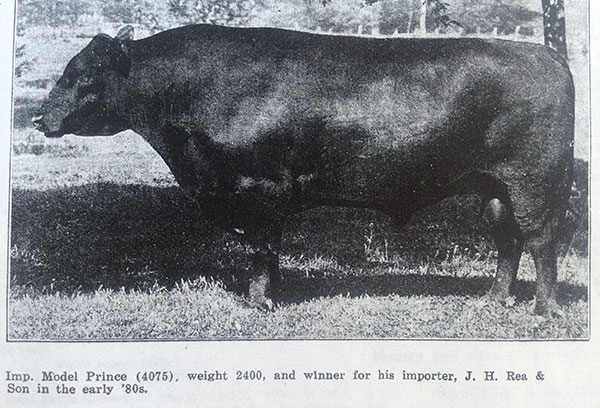 One of three of the first Angus to arrive in America

In 1876, the first four Aberdeen Angus Bulls were imported by George Grant and Thomas R. Clark for their Kansas ranch. The breeder of those bulls was Mr. George Brown of Westertown, Morayshire, Scotland. Mr. Grant had the idea of creating a new breed suitable for the American west by crossing Aberdeen Angus on Shorthorns. He called this new breed Polled Angus Durhams.

For several years he used these imported sires on the horned cattle from the Indian territory of northern Texas. When Grant died a sale took place in Victoria Kansas. The purchaser of about one hundred steers said: "I kept them over last winter, and the polled crosses did best, standing the winter far better then the Short Horn crosses. Their feed was cornstalks and prairie hay. At George Grant's they had to provide for themselves during the winter, as it is short buffalo grass that is found in that region. The man in charge of the steers at Victoria told me that in spring the polled crosses were in good condition, but the Short Horn crosses, for want of artificial food, could hardly rise up and walk. The polled crosses weighed about 120 lbs. live weight more than the other crosses".

One of those first four bulls imported by George Grant, Model Prince (4075) weighed 2400 pounds He was purchased by Joseph H. Rea of Carrollton, Missouri. A 1919 edition of the Aberdeen-Angus Journal reported:

On December 8, 1880 a tall, rangy Missourian came to the market with 36 head of fat cattle that marked the opening of a new epoch in the agriculture of America.

"Those steers, fed and marketed by Joseph H. Rea, were the first steers carrying Aberdeen Angus blood ever marketed in Chicago. They made the packing and livestock world sit up and take notice when they dressed fully 5% more than the average." 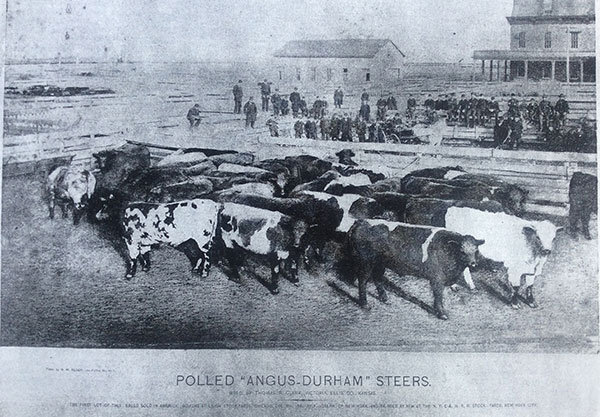 The first progeny of Aberdeen Angus to reach the Chicago stockywards. They were called "Polled Angus Durhams"

Carrying on his father's success with Aberdeen Angus son, J. W. Rea, in 1905 marketed the first steer in Kansas City ever to sell for 10 cents a pound.

So impressed by the feeding quality of these first "Doddies", Joseph Rea sent his sons to Scotland to buy more seedstock. They brought back the first Trojan Ericas to America, as well as a herd bull, Erin (3713) and Elsie from Sir George Macpherson of Ballindalloch. The Rea herd grew to include Queen Mothers, Drumin Lucies, Kinnard Fannies, Rose of Advie, Nosegays, Kinochtry Emilies, Blackbirds, and Trojan Ericas.

Generations of the Rea family passed their closed "Moss Creek" herd down from father to son. In the winter of 2004 Joseph Rea's great-grandson, Stephen, gave the herd to the University of Central Missouri.

"My father once said that he would never sell the herd, the cows belonged to the family and he expected them to keep the family name for years to come. Now, with his passing, his wishes will be followed," remarked Stephen Rea. "The Moss Creek Herd will never be sold, it will live on at CMSU and the Rea name will continue with it."

The 125 year old herd is intended to serve as a hands-on educational tool for students on the Prussing Research Farm.

Imagine my great pleasure when Stephen Rea visited Saddle Butte Ranch. He showed me a photo of his grandfather standing behind the first steer to sell for 10 cents a pound in Kansas City. Also an historic photo of those first polled "Angus-Durham" steers. As well, I was struck by the photograph of Model Prince. At 2400 pounds he was anything but the "belt buckle" cattle reportedly to come from Scotland.

I told Stephen of my pride in being a seed-saver for the remnant families authenticated to be pure Aberdeen Angus. He said, "My late father would have been very pleased with what you have accomplished with your "doddies".

Someday soon DNA will reveal the names of unscrupulous "breeders" who thought nothing of adding other breeds to the registry, turning pedigrees into meaningless paper.

In the meantime the honor of looking after true Doddies encourages us every day. 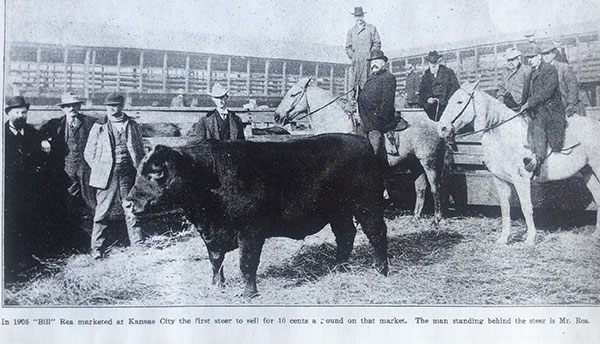