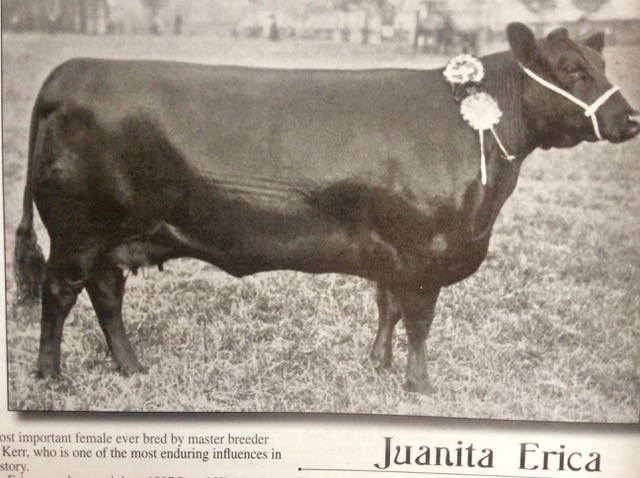 Juanita Erica
When I tell ranchers that I am breeding the original Aberdeen Angus cow I hear "Been there, done that". Juanita Erica was born in 1907, the creation of master breeder J. Ernest Kerr of Scotland. It's been 113 years since that cow was in ribbons. As I drive through the country I never see her equal.

Our herd began with the purchase of daughters of Rito 054. It soon became obvious to us that these cows needed to be mated to a bull that would add fleshing ease to the progeny. The choice was also obvious: a well-evaluated, high accuracy sire known for the longevity of his daughters and for being free of genetic defects, Shoshone Viking GD60. We used four sons of Viking GD60 in our breeding program, all of them new to the industry. As we perused the 1978 catelogue of the Wye Plantation Angus Bull Sale we noticed that almost all the cows showing 10 or more calves in their weaning ratios were sired by imported bulls. Believing that longevity is a key ingredient to creating a truly balanced cow herd in synchrony with nature, we sought out old Wye breeding, purchasing 10 heifers and several bulls. We were also impressed with the consistency of the Shoshone cattle, particularly the quality of their udders. We were able to choose 8 heifers from Larry Leonhardt’s replacements. And finally, we were impressed with the discipline Sam Wylie has shown in the breeding decisions that created the Octoraro herd. We have quite a number of daughters of Octoraro donors by the grand old sires Emulation 31, F0203, and Fabron of Wye. It seems a tremendous advantage to us that most angus seedstock producers are in a mindless race for single trait superiority while we are able to work with such excellent blood.

Since 2010 we have used native Scottish bulls to fix phenotype for the optimal cow to prosper on grass without inputs. Some of our heifers will have calves with four straight generations of Scottish breeding. This means that they can perform consistently. As well, with the next calving season, we expect to have 100 native Scottish cows in the herd. As seedsavers of these unique genetics, we can now offer the best "back to basics" genetics in the U.S.

Select a cow for more information