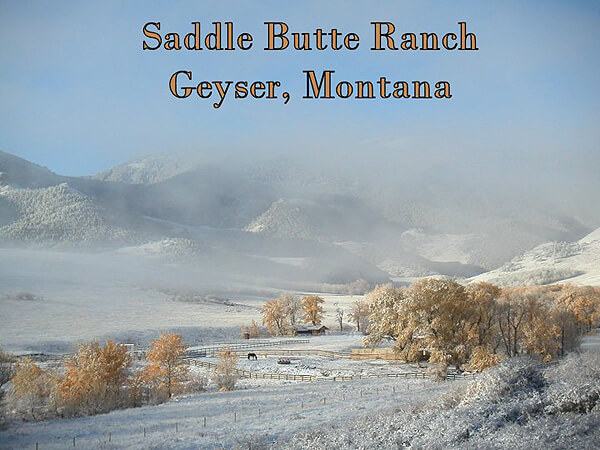 We Are A Glen!

Saddle Butte Ranch has become a safe harbor for an endangered species: the Aberdeen Angus! With less than 200 breeding cows in the world that could be authenticated as true Native Scottish Aberdeen Angus, the Rare Breeds Survival Trust in England listed Aberdeen Angus as an endangered breed. Today on Saddle Butte Ranch it is with a feeling of privilege and anticipation that we are developing a herd to become the most important source in the U.S. for this important breed. With the coming calving season we will have 100 Native females.

The Recovery of Aberdeen Angus

In the Scottish glens Angus cattle were developed for over 150 years, father passing to son genetics that were sustainable, free of lethal genes and designed to thrive on grass and to produce consistently desirable carcasses. Since the 1960s cattle have suffered from “scientific” notions of breeding. Breed associations began to promote numerical values to describe the probabilities of increased production in certain lines of genetics. Entrepreneurs recognized the value of promoting specialized genetics. Artificial breeding practices enabled the once isolated farmer the opportunity of trying promising “new” bulls. Every year, the latest bull to try. In a short time beef cattle grew in size and lost their efficiency on grass, their prepotency, and even their purity. Seedstock breeders became more like car salesmen than breeders. Somewhere along the line the phrase, “preservation of the breed”, was dropped from the charter.

The genetics of possibility have not been able to perform in real world environments where beef cows must live. Cattlemen have begun to think about cows in terms of sustainability and efficiency. A few began the search for the old, proven lines of genetics that favor the highest performance that a cow can be capable of on grass. Enter Geordie Soutar of Forfar Scotland.

Geordie grew up familiar with Aberdeen Angus. As a trainee auctioneer he developed his eye. And saw, around 1970, that his countrymen had lost their confidence in the old blood. It was 1995 when Geordie decided to try to find a true native Angus cow. At that time, Bob Anderson, Secretary of the Aberdeen Angus Cattle Society had conducted an exhaustive search for the last of the native cattle. He discovered fewer than forty. Most were old, 16 or 17 years of age.

Using Bob Anderson's list Geordie set out to try to purchase any of these remaining cows. It took Geordie 14 years to finally acquire all the remaining cow families. Geordie bought his first cow, Karen of Boghall. He also met Jeff Ward of the Sinclair Cattle Co. and soon both men were excited about the project of trying to recover these lost genetics.

Had not Geordie started his quest in 1995 all would have been lost. Within two or three years the last of the old cows would have perished. But gradually Geordie bought a few. He bought Ejeta of Templehouse. Then Jipsey Nova and Jipsey Yoko from Jeremy Sharman. Then several Cherry Blossoms. In 2009 he was finally able to buy a Miss Burgess (one of only two left in existence), a Pride of Aberdeen, and a Nell of Albar, which was the oldest recorded family in the Angus breed. That family of cows traced back to a castle not ten miles from where Geordie lived. When Angus were still called “doddies” they were developed into a family at Albar Castle and eventually became known as “the Sherriff's cattle”. By 2009 there were no native cattle left to find. Where once 70-80 Angus families had been carefully developed, now, through Geordie's efforts, just representatives of eight families remained. They were the Ericas (and Eulimas), the Prides, the Kindness Prides, the Jipseys, Nells, the Cherry Blossoms, the Miss Burgesses and the Ruths of Tillyfour.

Geordie and Jeff had to suffer through prohibitive actions associated with BSE and then Foot and Mouth disease before at last they could initiate their plans to develop the old Aberdeen Angus cow in the U.S. More than a 100 embryos were shipped to Jeff Ward and the first calves were born in 2007. Soon thereafter Genex recognized the value of this old blood and purchased an interest in Cortachy Boy, Jipsey Earl, Commander Bond, Cup Bearer and Red Native.

Yet in 2011, as cattlemen bid on bulls at the Sinclair sale in Wyoming, it was abundantly clear that even the first cross with Jipsey Earl had produced bulls worthy of such a legendary past. The Jipsey Earls were perfectly uniform and sold easily. The old blood has again begun to flow. Now, eight years later, these genetics are flourishing at Saddle Butte Ranch.